We are not there yet, but it can happen in the next two to three years given what has happened already. Are the early Magic sets worth collecting to sell in the future? It all depends on what you mean by future. If you mean in the next five years, the next downturn in the economy in the US and/or Western Europe will likely lower prices of early Magic. If you mean in the next twenty to thirty years, my opinion is that all of these cards, regardless of how playable they are, will be collected a lot more then than they are now because many of the players who are now in their 20s and 30s will likely then have lots of nostalgia and interest in collecting the low print sets. Its basic demographics. I think alpha/beta/unlimited/AN/AQ/LE is the only range though. All sets after that were printed in much larger print runs.

Having said that, buyouts don't work long term because whoever attempts it needs to ride on the product for a very long time. But the buyouts will continue because it is human nature to err. But if you have spare money and you are willing to sit on a collectible for twenty to thirty years, I think these early sets are a great way to put away a little money in a fun asset. Will it beat putting that money in a 401k? No one knows. It could, but the huge gains have already been made.

Also, not enough people who are into early Magic were around when the U.S. Zeppelin stamps in the 1980s, or comic books in 1993 were in a speculative bubble. When those bubbles burst, it's not pretty. If enough people get into early Magic and form a bubble, a small number of speculators will make out pretty (the ones who are creating the bubble) and a lot of poor saps will lose their money. In the case of the 1993 comic book bubble, that one took out hundreds of comic book stores across the nation. We are not there yet with early Magic, but if Legends commons hit $10 each, we will know we are in a bubble, because anything with a printing of 400,000 will be unable to hold that price for twenty years, and not even if the collector base increases ten-fold. There just aren't enough people in the US and Western Europe who are or will be Magic collectors.

Finally, hobbies compete with other hobbies. Even in the relatively small world of TCGs, people can collect Pokemon, Yugioh, Force of Will, and a very long list of defunct TCGs. And then when you broaden out to all collectibles-and for this you can look at the lots offered on eBay; there are millions of collectors in all sorts of hobbies. Just for stamps, there are more than 5 million lots on eBay. And then you have sports cards... that's a lot of competition when you want to go sell all those Legends commons. I am just saying...

Now, if you enjoy collecting these early cards as I do, then it doesn't matter how much you are going to make out of investing on them. In this latter scenario, any money you net will be a fun bonus. I love these early cards. They are just cool. If I can sell the handful I have many years from now for a small profit, that will be cool. And if I don't, it won't matter because I didn't spend a lot of money on them. I on purpose chose to buy the unplayable ones just for fun. 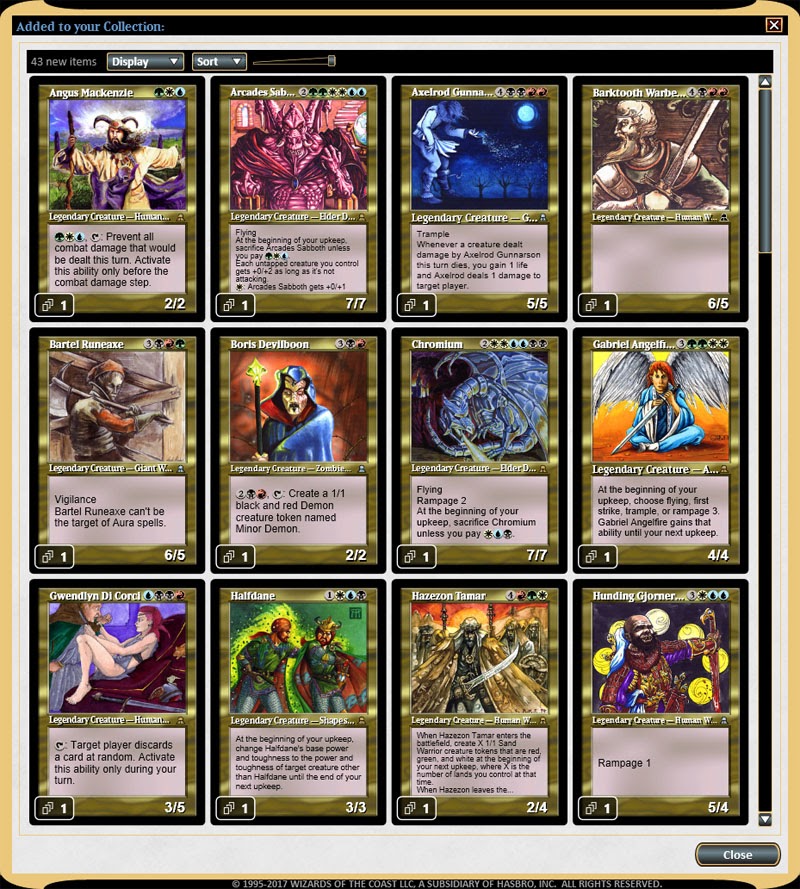