This one is minus Thought-Knot Seer, since it will be much more affordable to start renting it after rotation. I am using a playset of Ghostfire Blades just for fun. This is not the quality of equipment Vintage allows. 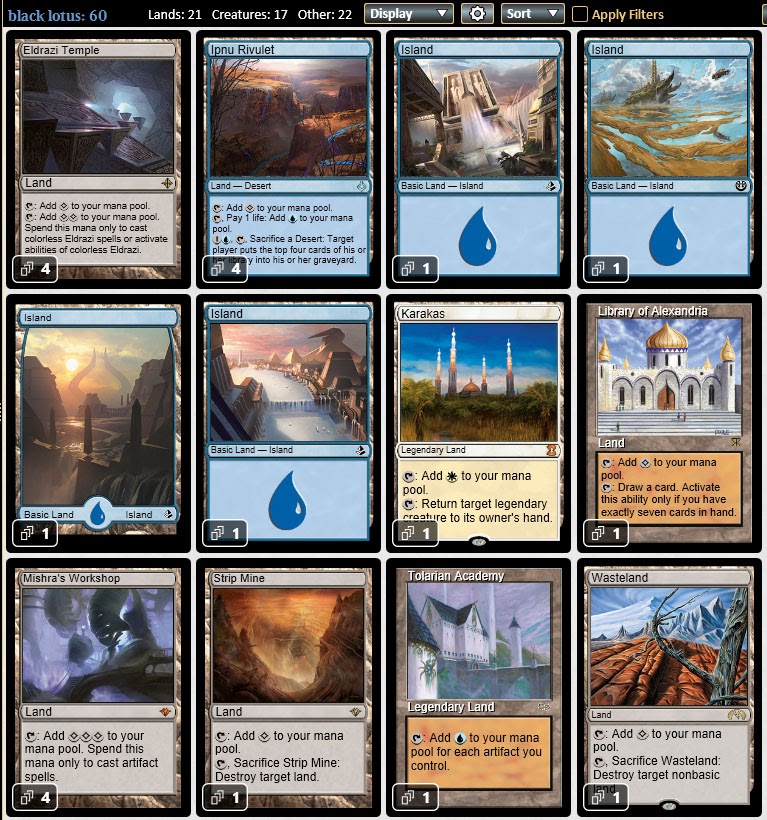 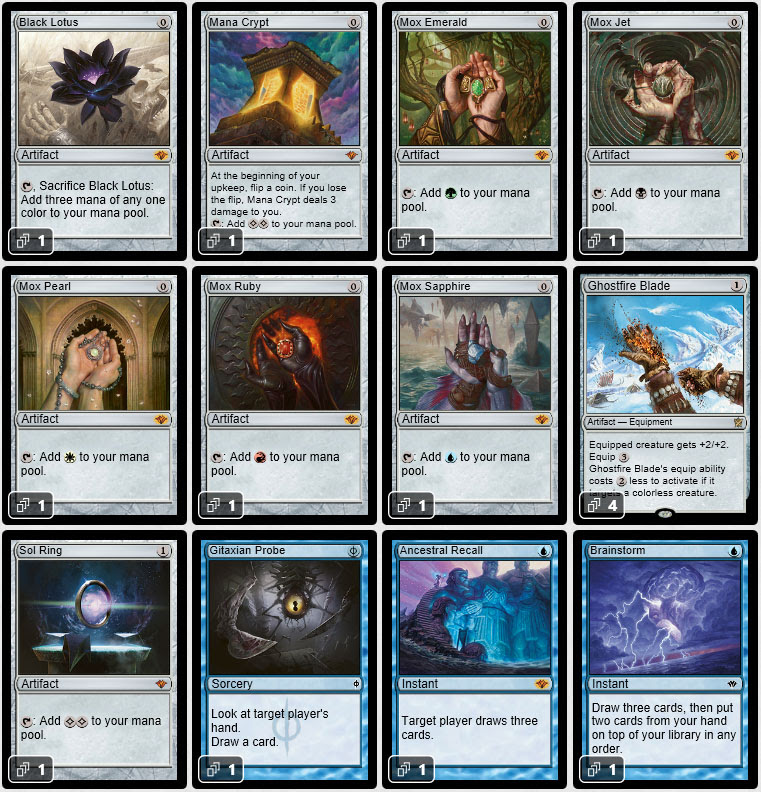 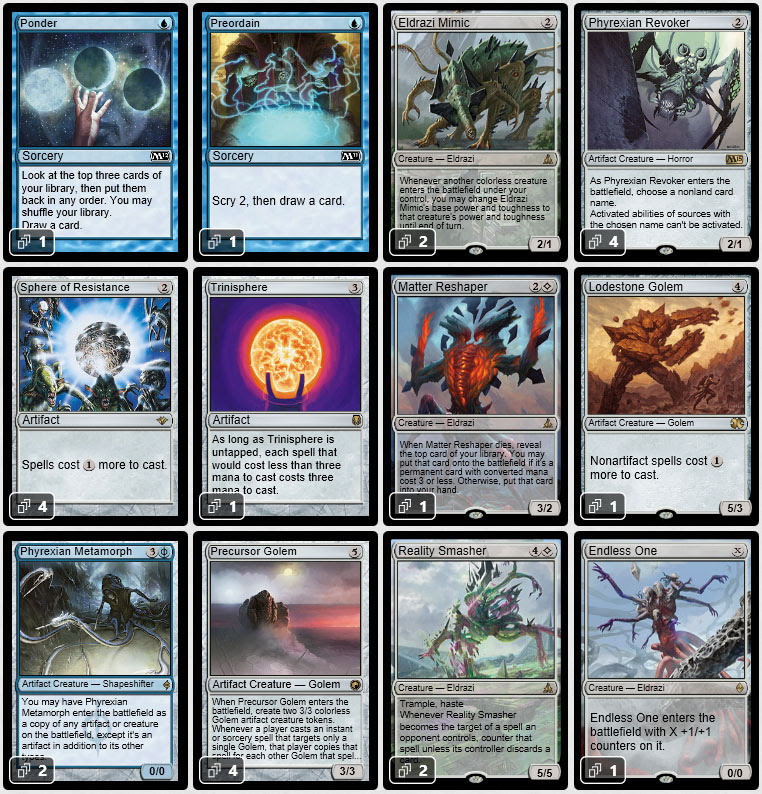 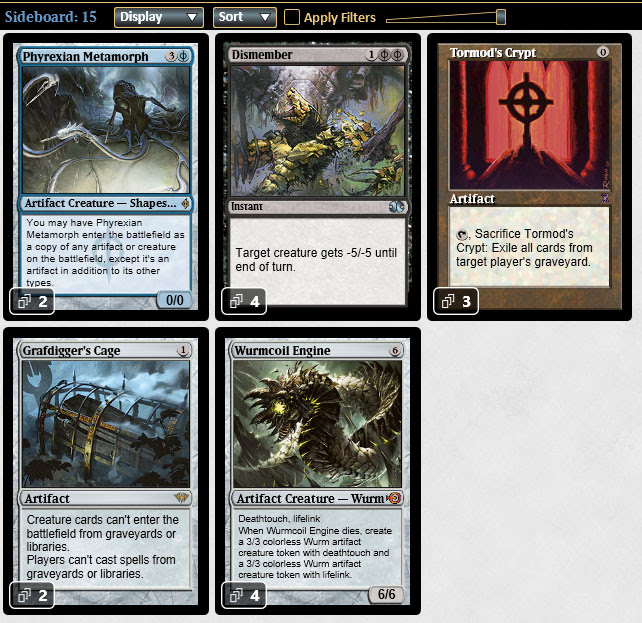 This deck has a split manabase, which is always frustrating to play with. and requires a lot more optimization than a manabase dedicated to only one type of mana source. We have artifact creatures that are served by Mishra's Workshop, and Mishra's Workshop cannot be used to cast Eldrazi at all! We also have Eldrazi Temple, which only gives you double mana to cast Eldrazi. This means that your hand needs several mana sources early game to build a successful strategy: you need blue mana for selected spells, especially Ancestral Recall; and then you need the lands previously mentioned. I could cut out all blue sources, but I already have Tolarian Academy and Ancestral Recall is Ancestral Recall. In this early version of the deck, I had some usual blue deck manipulation cards, but not that much card draw. Here is a first turn hand.

I wait to cast Black Lotus when it matters.

I did not have enough mana to equip. 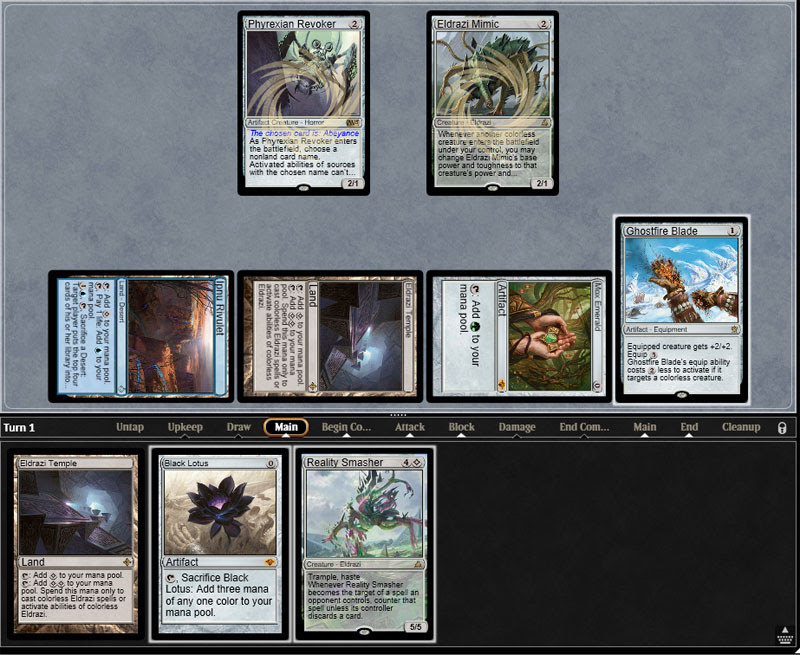 Here is another starting hand.

I cast one creature per turn and equip Matter Reshaper for 1 instead of 3 because it is colorless. 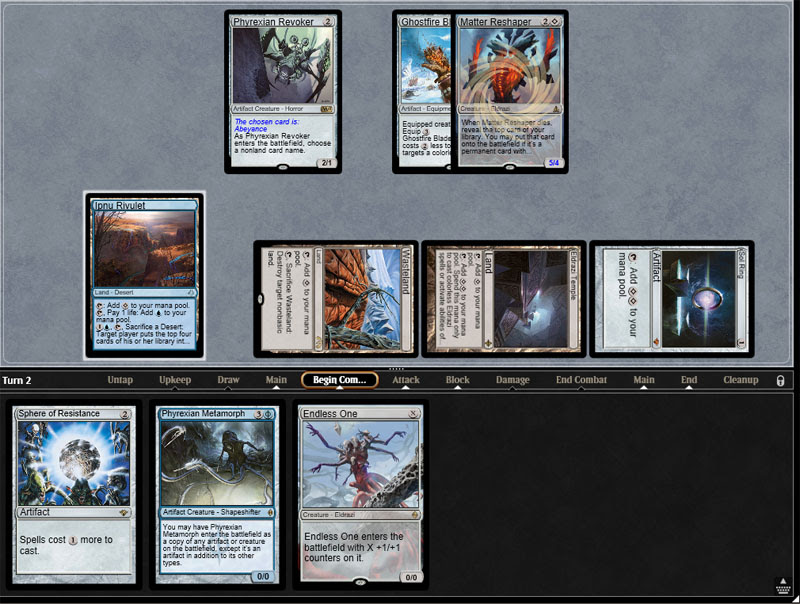 I then create a second Matter Reshaper using Phyrexian Metamorph. 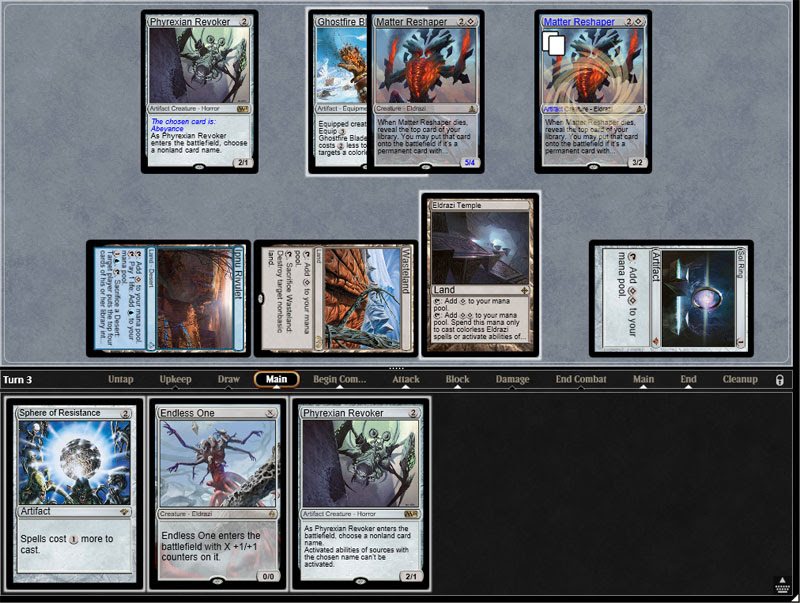 I need to wait one more turn to cast the biggest Endless One possible. 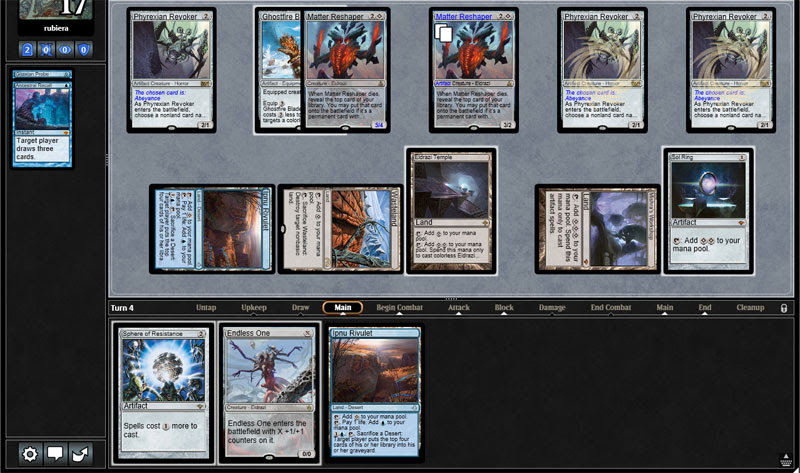 I cast Sphere of Resistance to limit an opponent's moves. The deck has offensive moves using creatures, and then once all those creatures have been cast, it's time to play the defensive spells: Sphere of Resistance, Null Rod, and Trinisphere. Phyrexian Revoker is a mid to late game play to shut down specific cards' activated abilities.

Here is the first turn hand for another game.

I can cast Eldrazi Mimic early. 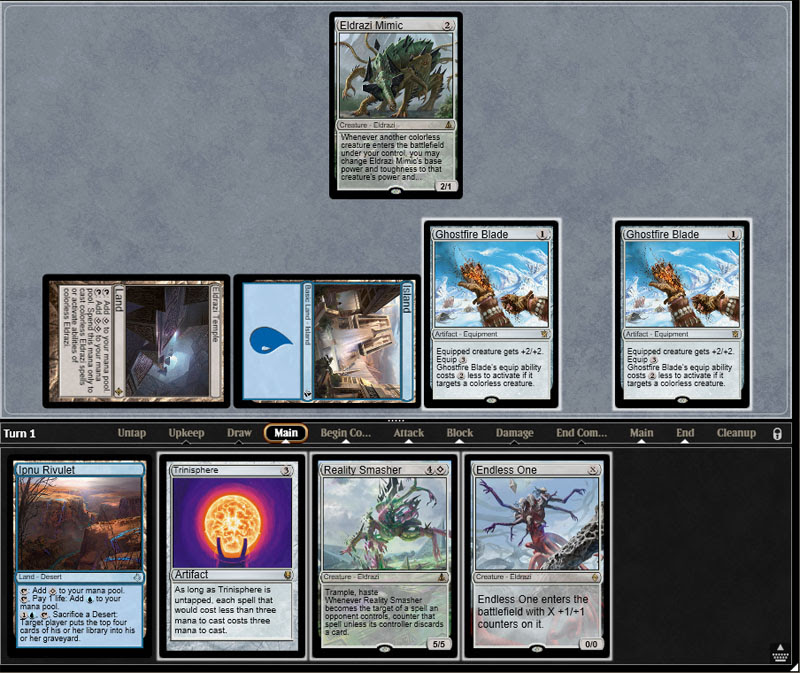 And I can equip it multiple times, which is lame in Vintage with such a better selection of cards. 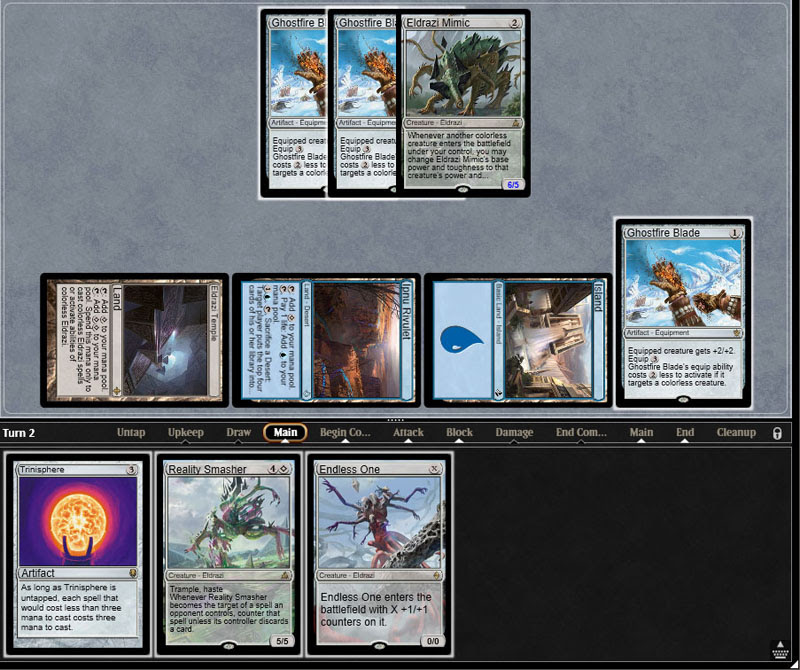 Yeah, this is cute, but it's time for a change. I am cutting out Ghostfire Blade. 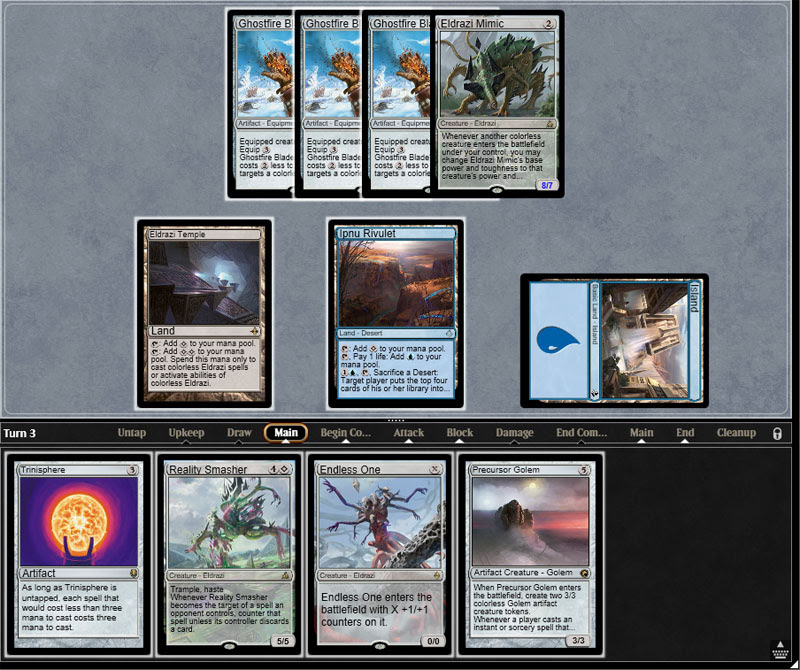 I drew this hand and decided that I need it some cantrips.

Go to Part 2
Posted by Rubiera