I am really liking the vampire deck. 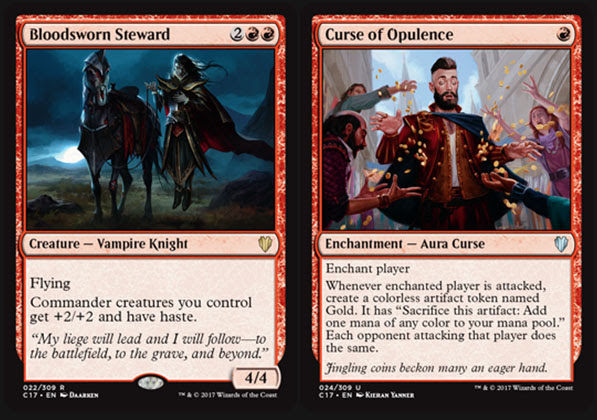 Bloodsworn Steward [Vampire]: Useful since this deck has a low-casting commander.
Curse of Opulence [Dragon deck]: Hey, it's that dude again! I love this cycle. It is perfectly designed for multiplayer. 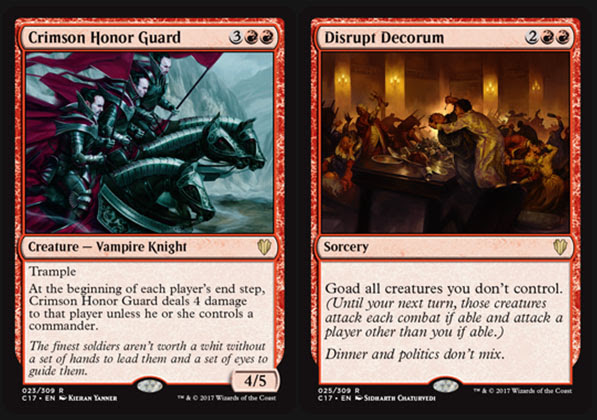 Crimson Honor Guard [Vampire]: Tricky if your commander gets taken out. Use with caution.
Disrupt Decorum [Vampire deck]: Another very tricky play. You may not want to cause havoc like this. Luckily, if it turns out sideways, you are only making this mistake once. 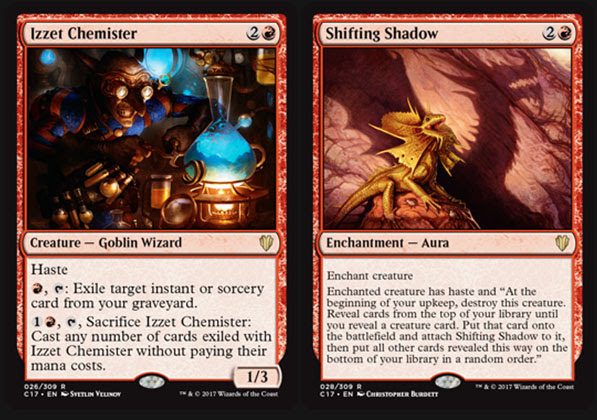 Izzet Chemister [Wizard]: New card. That is one powerful trick. Drop some gigantic instants and sorceries in your graveyard for next to nothing, sac this, play them all at once... that's just insane. "without paying your mana cost" is well worth remembering here.
Shifting Shadows [Wizard deck]: Needed to speed up the table. Once this hits, you are swinging with Haste off the top of your deck with whatever you draw. 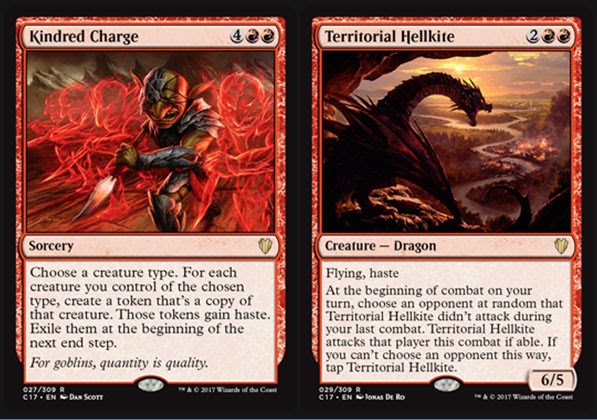 Kindred Charge [Vampire deck]: Nice late-game play. It can be dead in your hand if your vampire count is low, though.
Territorial Hellkite [Dragon]: New card. Another way to speed up the game. It will swing for a round, and if someone has not taken it out, you will tap it, and then swing for another round. Every opponent will want to make it their top priority to take it out though. 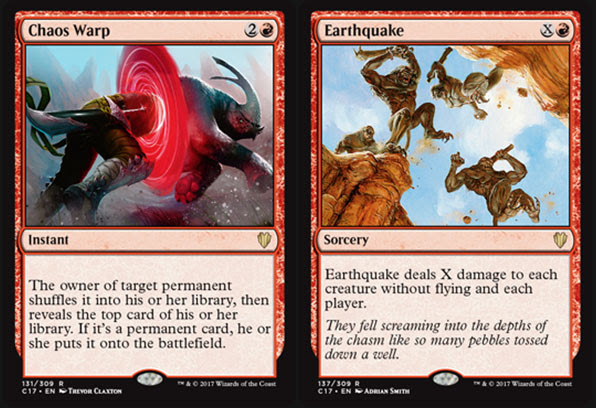 Chaos Warp [Wizard deck]: A great way to make a big threat go away and hopefully get replaced with a lesser threat.
Earthquake [Dragon deck]: Makes perfect sense since you are the one playing a bunch of flyers. You will take direct damage from it, though. It needs to be a carefully assessed play. 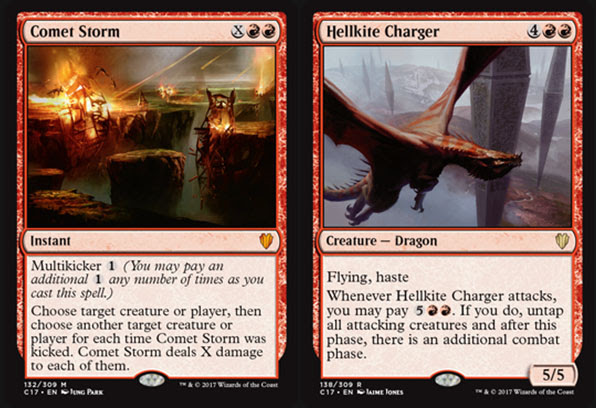 Comet Storm [Wizard deck]: I think Wizards needs to lay low and not reprint this card in like the next twenty years. It reads great, but it takes up a slot for which there are other mythic rares that are in dire need of a reprint. Even then, it is a great way to knock off more than one opponent in a single, late-game swing.
Hellkite Charger [Dragon]: It's a cool effect in a Timmy/Tammy deck, and whoever plays this deck will be the type of player who feels at home paying all that mana for a fringe effect. 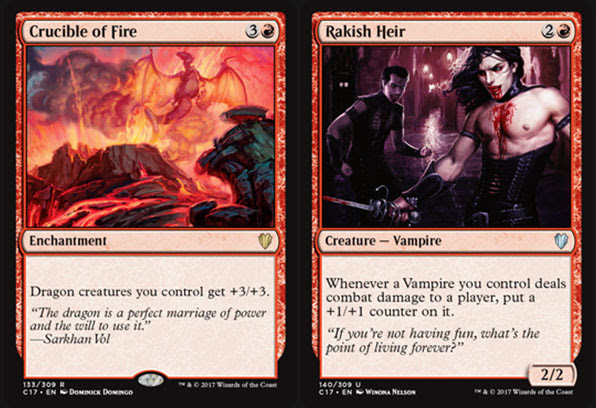 Crucible of Fire [Dargon deck]: Absolutely necessary in a dragon deck.
Rakish Heir [Vampire]: Solid inclusion yet a candidate for substitution to make the deck a little stronger. In other words, when you are ready to improve this deck, this critter should be one of the first to go. 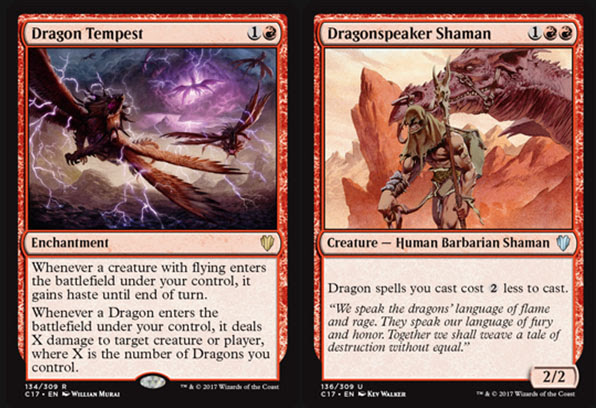 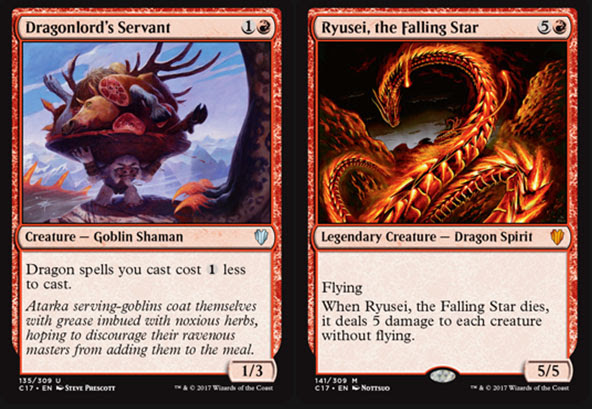 Dragonlord's Servant [Dragon deck]: Needed in a dragon deck.
Ryusei, the Falling Star [Dragon]: Same as Comet Storm. There must be better cards that are not yet reprinted, and this card is taking up a mythic rare slot. It already took up a junk mythic rare slot in Modern Masters, does it need to do that again? This card costs 4 cents online. This one and Comet Storm...ouch. If red is lacking in quality mythic rares, how about we get new ones? Someone punted here. 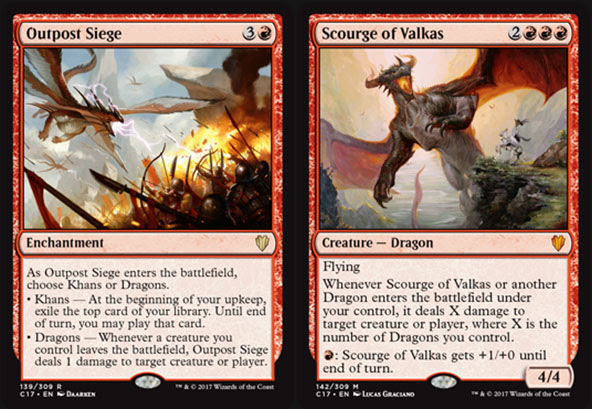 Outpost Siege [Vampire Deck]: The Khans option is awesome. Anything that lets you filter through 99 cards is bound to help you.
Sourge of Valkas [Dragon]: As long as you can protect your dragons, the effect can be really good. 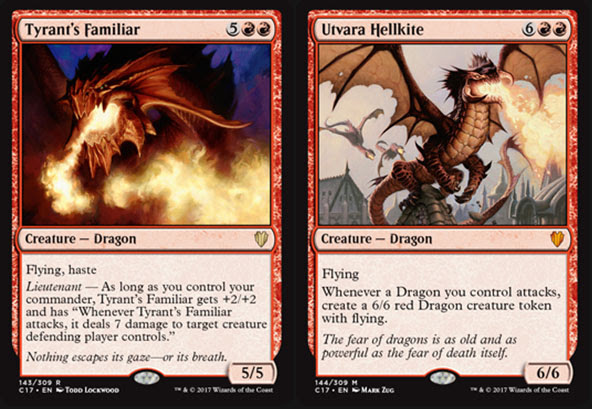 Tyrant's Familiar [Dragon deck]: It makes sense for it to be a seven drop since you will only be able to control a heavy-casting commander mid to late game. It's a powerful effect.
Utvara Hellkite [Dragon]: I am sure this dragon is way better in commander than in constructed formats. If you are able to get it going and able to defend it, that can be a lot of 6/6 flyers rainng down on your opponents. 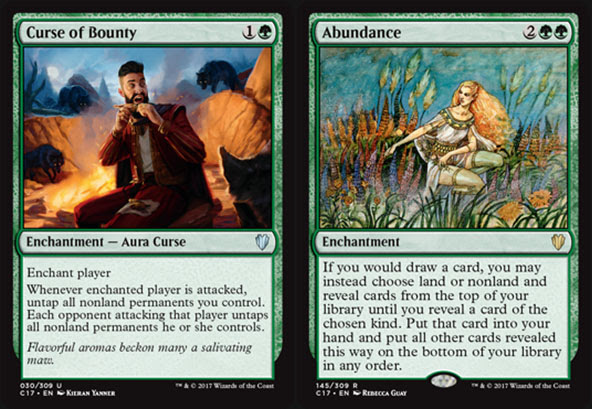 Curse of Bounty [Cat deck]: I get it, it's the same guy for all of them. It could be a good bonus, although I think all the other ones are more immediately impactful (fine, editor Nazis, of impact!).
Abundance [Cat deck]: Classic card, and classic artwork from Rebecca Guay. I was just playing with this card online. If you already have all the lands you need, this card will let you play online nonland permanents, and if you are mana-screwed, this card will get you out of it. 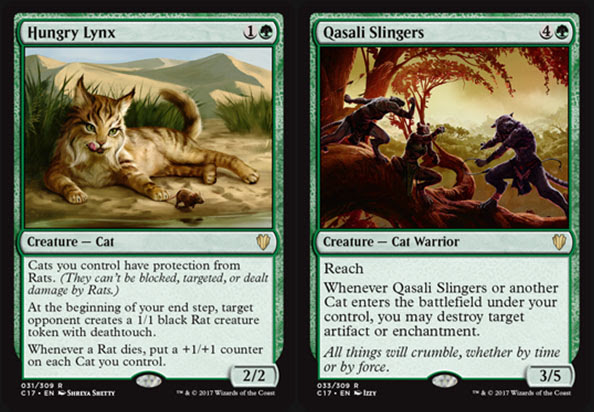 Hungry Lynx [Cat]: Protection from rats is an useless clause most of the time. I don't get this card in this deck... it would be the first one switched out.
Qasali Slingers [Cat]: That's a pretty good effect, normally found on smaller critters, but this is commander. 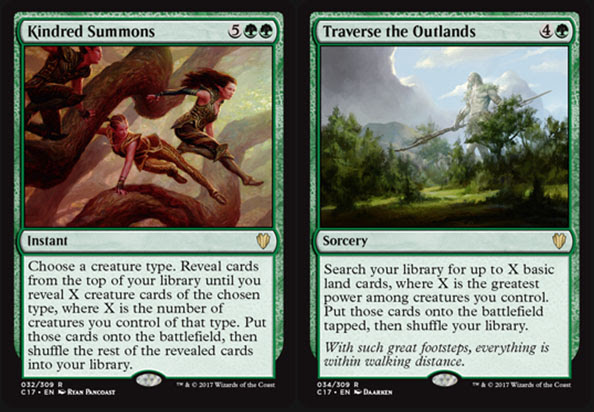 Kindred Summons [Cat deck]: This is one awesome late gane play. Double cats will be a lot of fun, yet this play would be a great time for anyone with a board wipe to use it.
Traverse the Outlands [Cat deck]: Another late game super-play. This one is way less risky than dropping a bunch of critters only to watch them get wiped. This one is pure Johnny awesomeness. After this play, you should not need to cast any more mana. 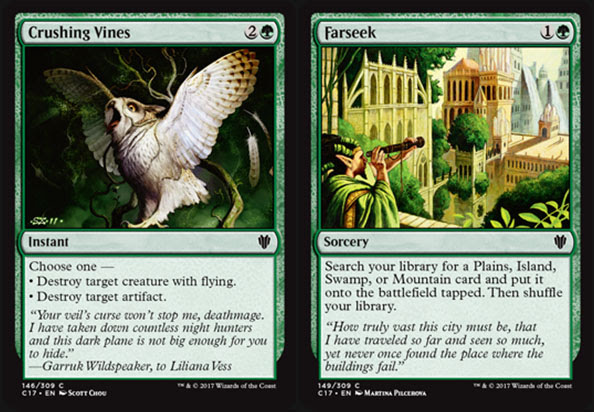 Crushing Vines [Cat deck]: Useful in a green deck. Having two choices here is way better than having only one of those choices at lower mana.
Farseek [Dragon deck]: Because a five-color deck will need this. 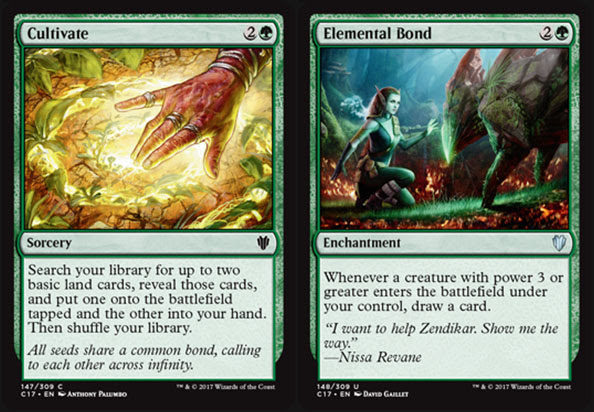 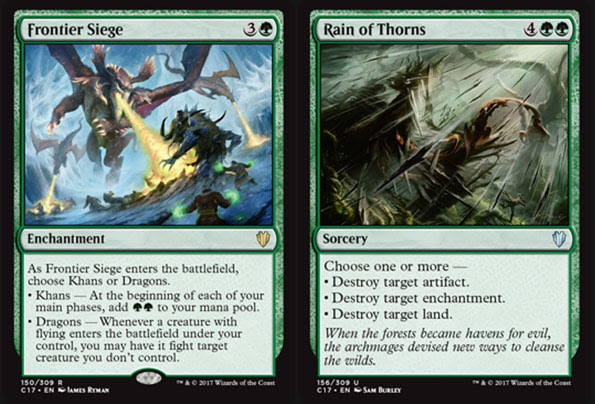 Frontier Siege [Dragon deck]: Dragons is really good on this one. You can be sniping critters one at a time, turn after turn.
Rain of Thorns [Dragon deck]: Versatile. 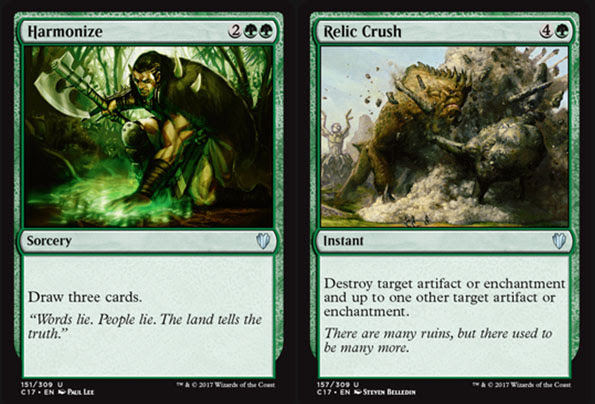 Harmonize [Cat deck]: Great color pie violation card, straight-up card draw in green.
Relic Crush [Cat deck]: Commander is great for this card. There will likely be enough artifacts and enchantments on the table for this card to be useful. 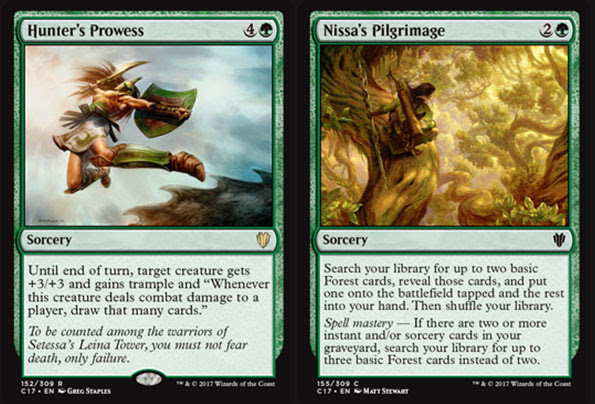 Hunter's Prowess [Cat deck]: This is really good. Trample is what makes the likelihood of drawing any cards possible.
Nissa's Pilgrimage [Cat deck]: Yeah, this works here. It's only forests, but you are only in two colors, and in commander Spell Mastery is way more likely than in constructed. 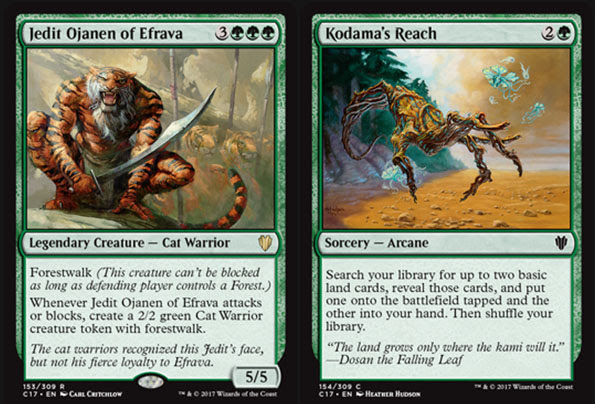 Jedit Ojaten of Efrava [Cat]: From Planar Chaos. More cats in addition to playing this card... yeah, this is a great inclusion.
Kodami's Reach [Dragon deck]: Needed in a five-color deck. 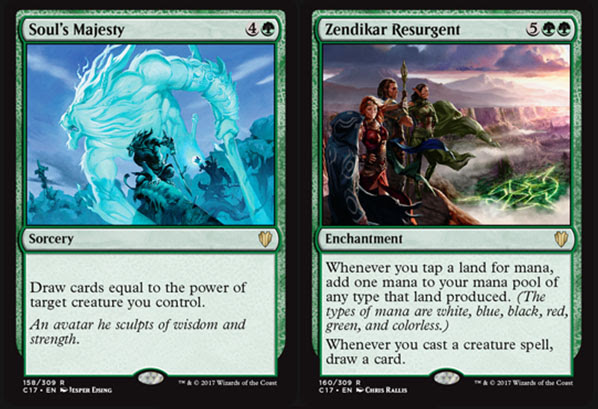 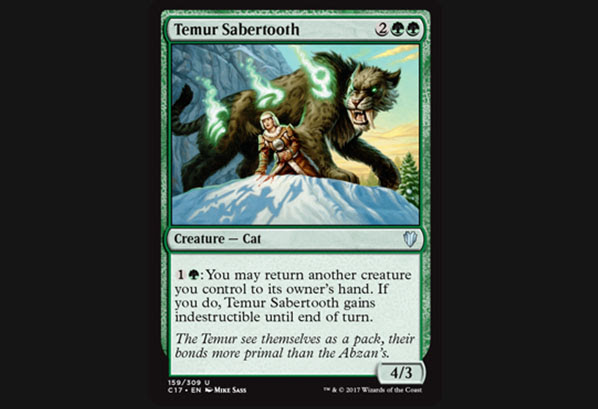 Temur Sabertooth [Cat]: Hopefully you will return something with an Enters-the-Battlefield (ETB) ability.