Let's see if we can spot some cool cards. 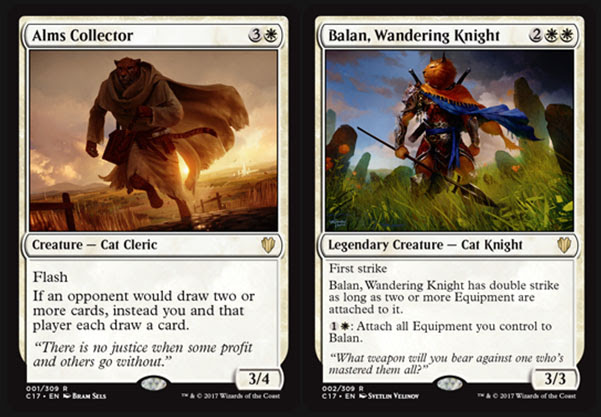 Alms Collector [Cat]: Great way to force an opponent to share the wealth, and you can do so consistently with Flash.
Balan, Wandering Knight [Cat]: One of your cat hitters. Nice that you can mass-equip it. 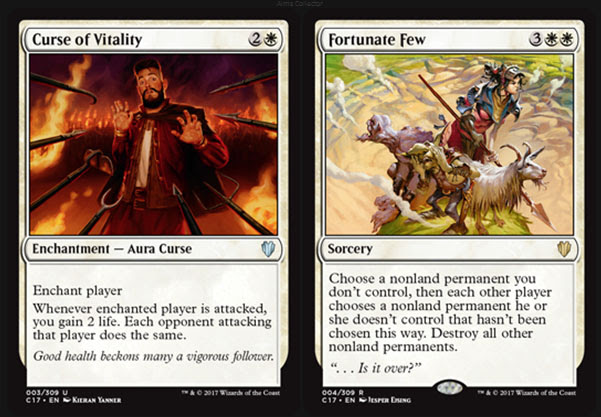 Curse of Vitality [Cat deck]: This goes on whoever has a clear lead at the table.
Fortunate Few [Dragon deck]: That's a pretty sweet board wipe, and if all you have is one gigantic dragon and lands, you lose nothing. 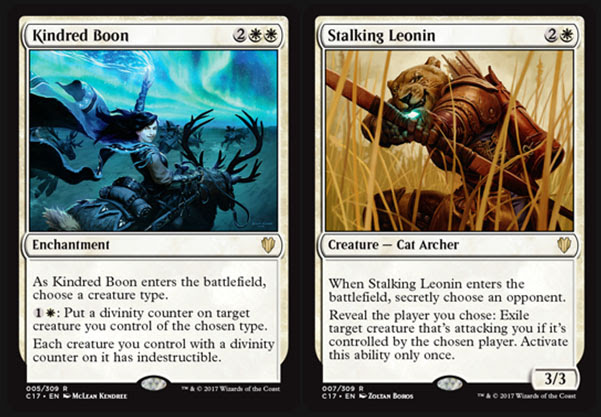 Kindred Boon [Vampire Deck]: Sweet way to protect all your creatures from destruction. Now you have to hope they don't get exiled. This is a new card.
Stalking Leonin [Cat]: Now if there was a way to keep bringing it back during the game and use the effect more than once... It exiles the creature. That's strong. 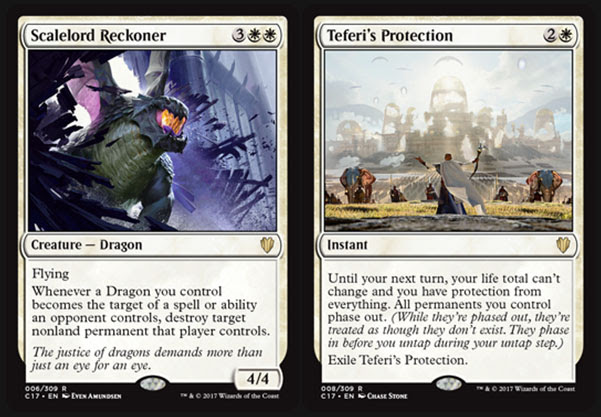 Scalelord Reckoner [Dragon]: Very powerful deterrent, and you get to choose which permanent you destroy, and it can be a dual land.
Teferi's Protection [Vampire deck]: This is a truly fantastic card. It's only a shame that it is not in a standard expansion where a 'fixed' and 'playable' Phasing is attempted. Armageddon after this and your opponents have no lands-oh, and that's the last game they will let you play in that play group. If there is a card that will cause people to buy these decks to complete a play set for Legacy, I think this one is it. 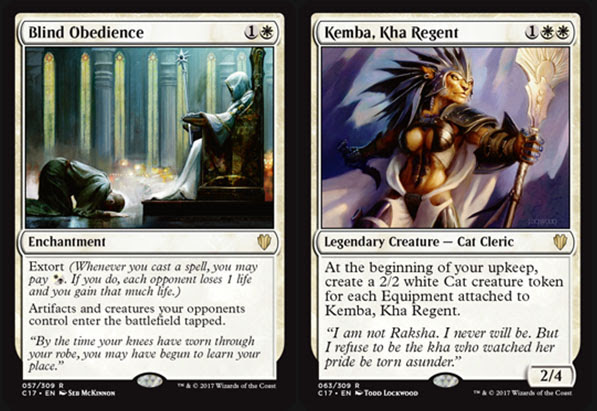 Bind Obedience [Vampire deck]: Solid Death and Taxes type card. I am sure in commander Extort is great.
Kemba, Kha Regent [Cat]: Really strong in a cat-equipment deck. I would have also liked the best card in one of the less desirable Magic sets, in this deck. You know I am referring to Brimaz, King of Oreskos, from Born of the Gods. 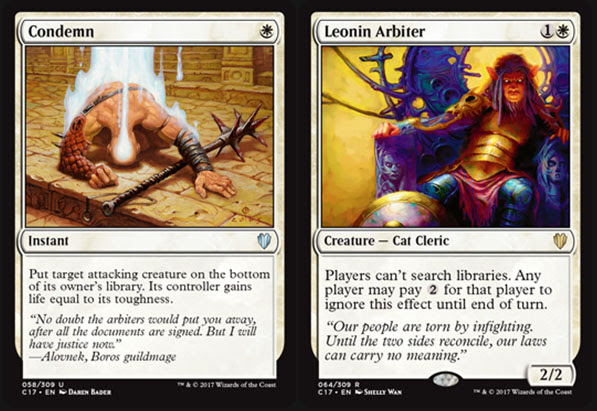 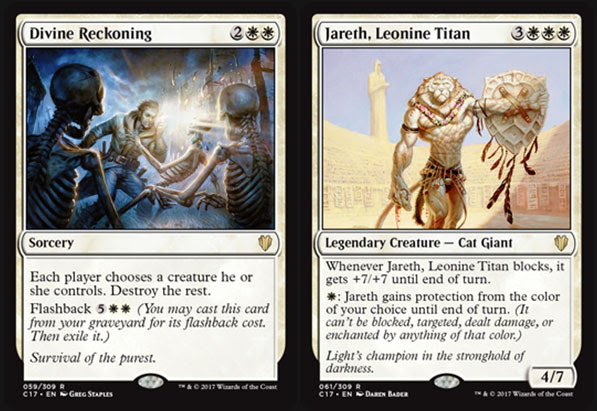 Divine Reckoning [Cat deck]: Fantastic in multiplayer when you are behind.
Jareth, Leonine Titan [Cat]: Very strong as a blocker, and also as a low-power attacker. In this deck you have equipment-which I would upgrade with better equipment. This can be more than a gigantic wall. 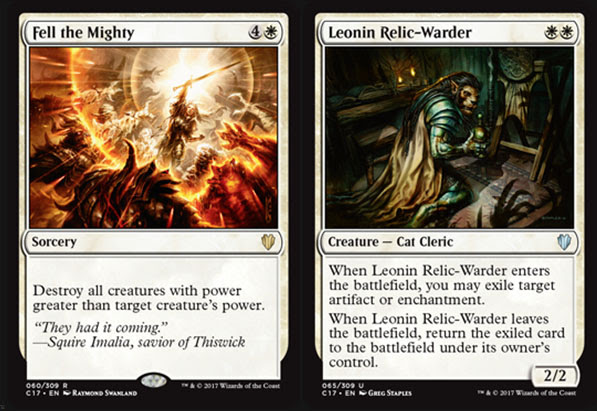 Fell the Mighty [Vampire Deck]: Solid board wipe, especially against all those Timmy/Tammy dragons.
Leonin Relic-Wafder [Cat]: Reasonable, and in a full table, at least one opponent will get hurt by this when it enters the battlefield. 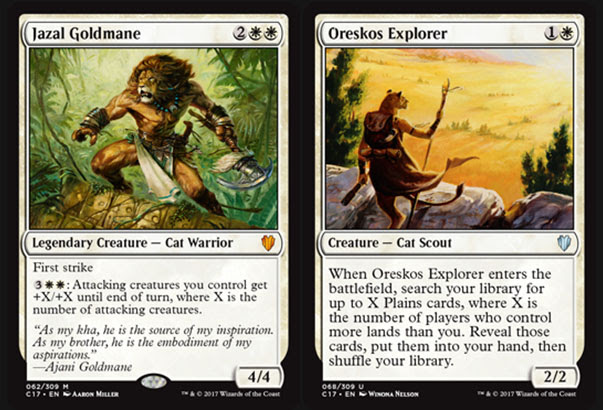 Jazal Goldmane [Cat]: Nice 'go wide' for your cat army. Not terribly useful when it's your only cat on the board, though.
Oreskos Explorer [Cat]: A great way to catch up with your lands. In the cat deck, Plains are what you want anyways. 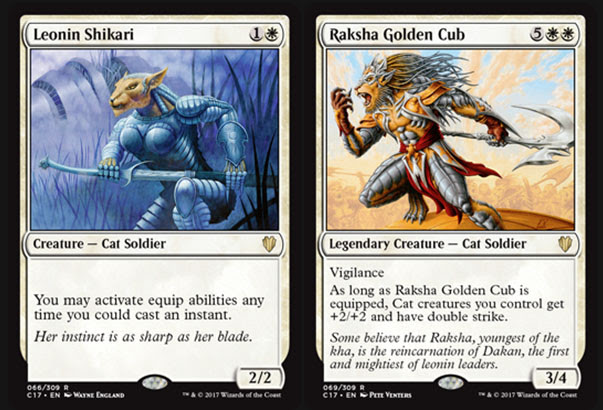 Leonin Shikari [Cat]: Really good as a recovery when one of your critters gets removed, and you want to use the extra mana at your end step to equip on a left-behind critter.
Raksha Golden Cub [Cat]: In late-game commander, this will boost your army by a lot. You just ned to make sure your cat army is still standing when you cast this. 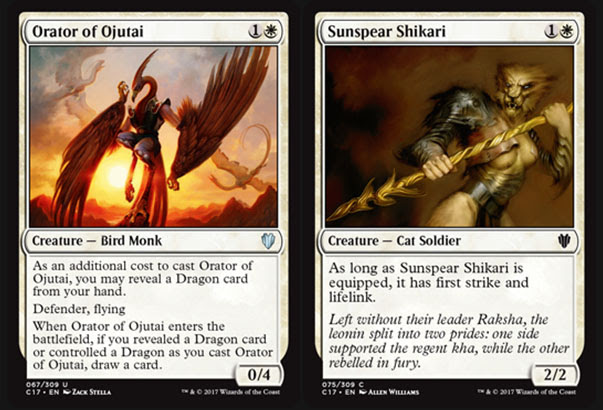 Orator of Ojutai [Dragon deck]: Needed early game as you wait to draw your big dragons. Not a card I want to be drawing mid or late game.
Sunspear Shikari [Cat]: Fits the equipment theme. 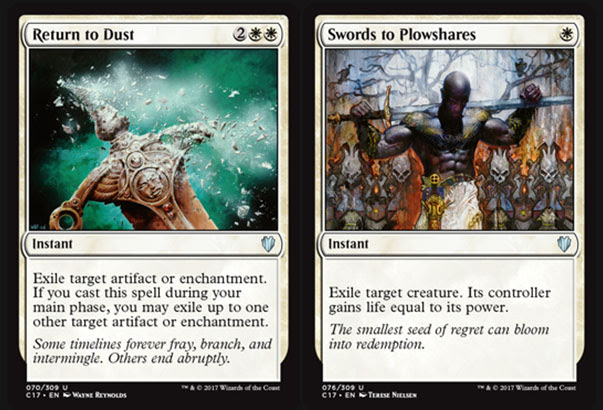 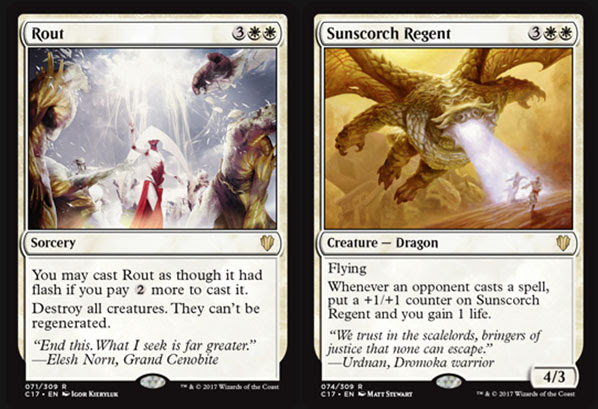 Rout [Cat deck]: Every deck in commander needs a board wipe.
Sunscorch Regent [Dragon]: Because the dragon deck needed a white dragon. 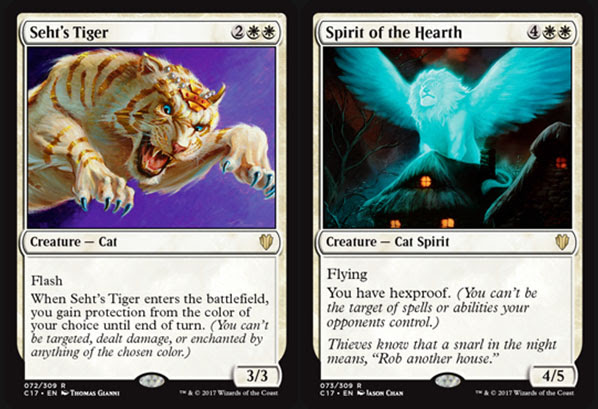 Seht's Tiger [Cat]: One great way to save yourself from a board wipe if you have the mana available.
Spirit of the Hearth [Cat]: Player hexproof is great against aggro decks with lots of 'smash face' red cards, and, of course, with these decks, you can't be the target of curses. 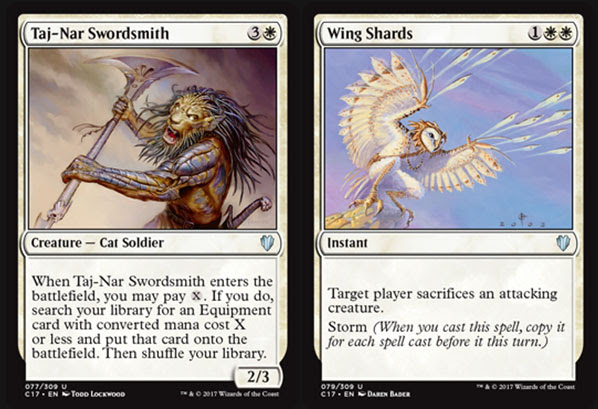 Taj-Nar Swordsmith [Cat]: A tutor for equipment? That's great.
Wing Shards [Cat deck]: It would be much better if you had the choice, yet if you are only being attacked by an indestructible or hexproof creature, this would remove it. 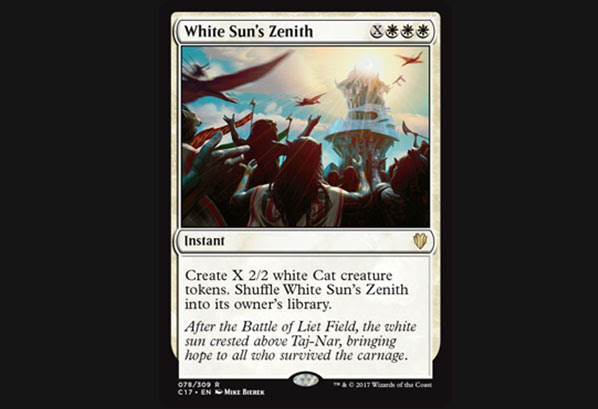 White Sun's Zenith [Cat]: Cats! I would love to cast this late game and swing for the win next turn. 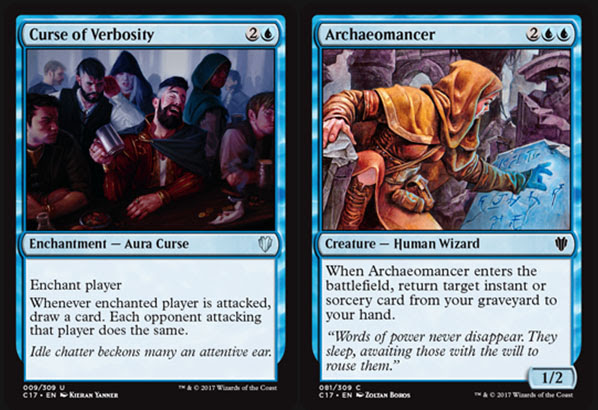 Curse of Verbosity [Dragon deck]: I wish these curses had been printed in standard. Either way, they are all great fun cards. A great way for everyone to pounce on a specific player.
Archaeomancer [Wizard]: Reliable and reprinted in many core sets. 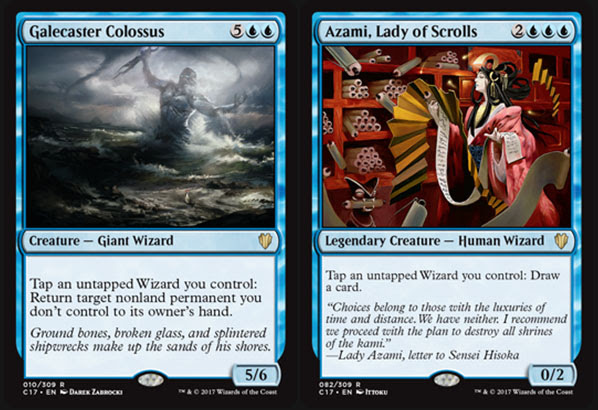 Galecaster Colossus [Wizard]: Powerful effect against a counters deck and against any planeswalker if it is at a high loyalty count.
Azami, Lady of Scrolls [Wizard]: It can be this Wizard. 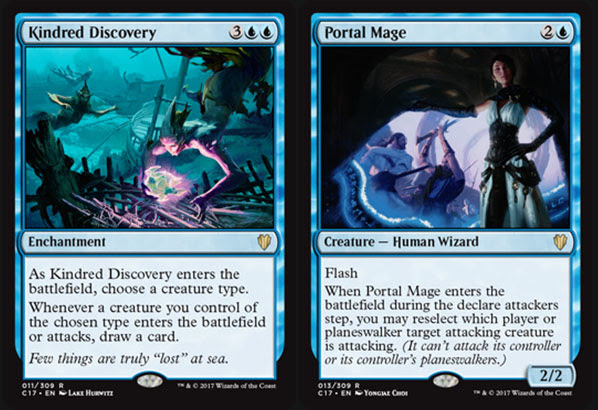 Kindred Discovery [Dragon deck]: That's very useful. From when this is cast, every dragon nets you an extra card.
Portal Mage [Wizard]: It will only mess up one creature, but that could be useful, especially if you have it attack something with indestructible or deathtouch. 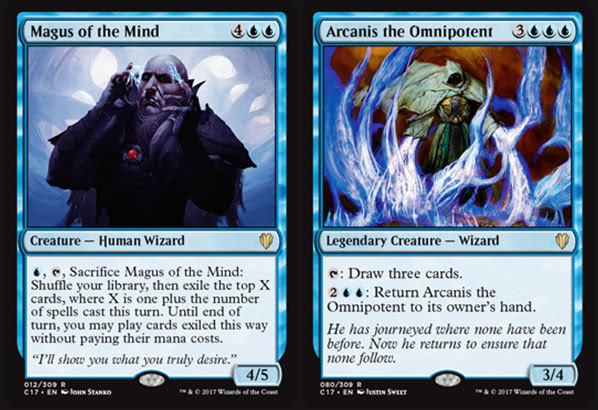 Magus of the Mind [Wizard]: If you are at the end of a round and everyone at the table has cast many spells, X can be, say, 8, for seven spells. That can be some powerful free casts.
Arcanis the Omnipotent [Wizard]: Draw three cards... that's awesome. That's always good if you can pull it off. 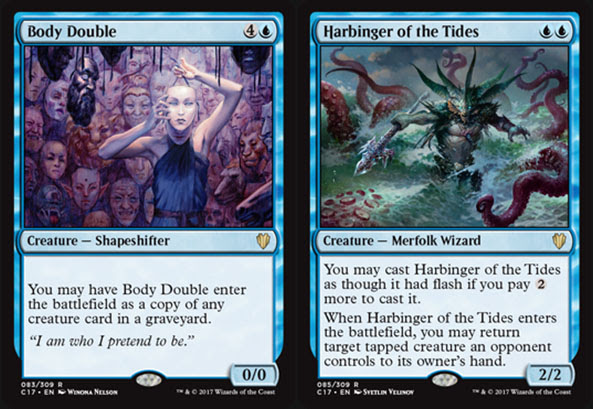 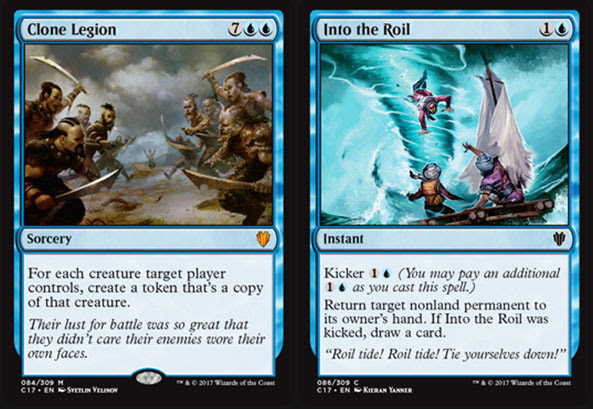 Clone Legion [Wizard deck]: If there is also a way to remove or send back to hand the original creatures copied, even better.
Into the Roil [Wizard deck]: Following the previous card, this would help after cloning. 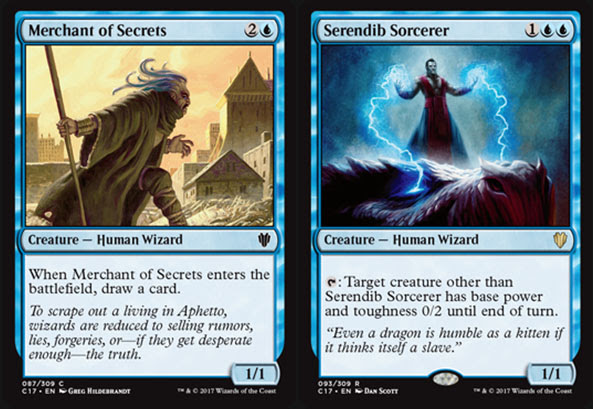 Merchant of Secrets [Wizard]: Early draw is good, any draw is good. It will be a chump blocker after it nets you a card, though.
Serendib Sorcerer [Wizard]: Would I use this during combat to lower some big critter's stats, or use removal on the reduced critter? I would try to do both. 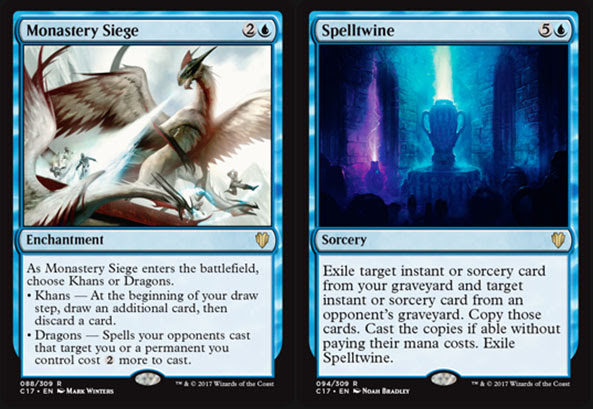 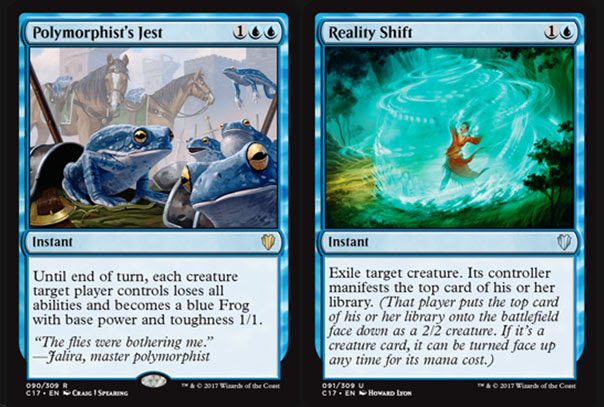 Polymorphist's Jest [Wizard deck]: Even better if you can follow it up with a removal spell.
Reality Shift [Wizard deck]: Great against a really big threat; maybe one of those Timmy/Tammy dragons.

I am not seeing enough counterspells in the Wizards deck. Am I missing something?
Posted by Rubiera