The sets I want in it are Avacyn Restored, Battle for Zendikar, and Oath of the Gatewatch. I have a complete set of AVR from an online redemption. I am also missing very few of those cards online. I am not interested in Primal Surge, Marlignus, or Descent into Madness. Here are the cards I need online at this point. 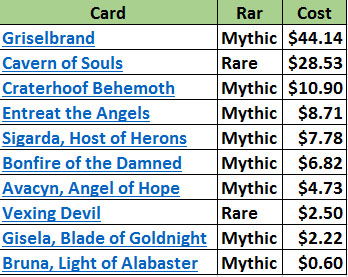 It would be fun to pull a Griselbrand! Here is a pack I just opened. I know... its a lottery I should not be playing. And these packs are $4.17 online... ouch! 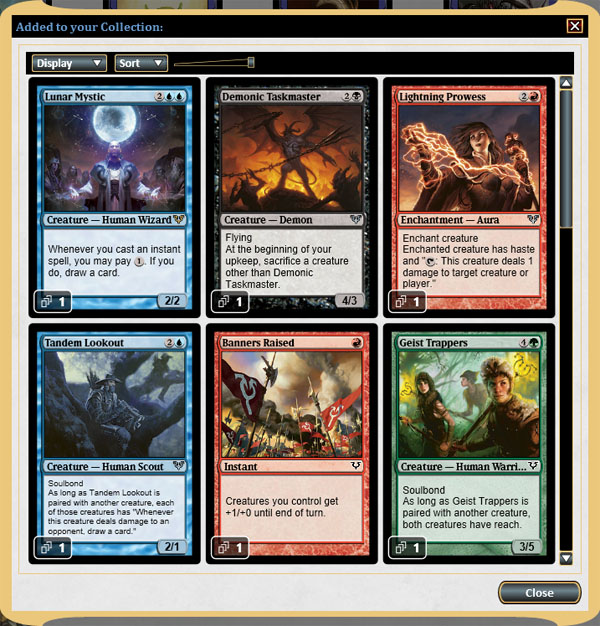 Anyways, on paper I have the complete AVR set, and an almost complete common/uncommon play set. This is the perfect set to match up with BFZ. Both sets have very limited removal that allows for the casting of gigantic spells: Battle Cruiser Magic at its best.

The easiest way to have fun building this cube is to get started with commons and uncommons only, and then add the rares and the mythic rares later. Griselbrand will be reprinted some day, and I am not in the mood to buy packs just to pull that card online. The same applies to Cavern of Souls.

Also, a cube is about having fun, and even if I am starting off with three sets, these are the foundation sets. If there is a cool card that I can add to have lots of fun, its in. The major limitation I want to keep is that I own every card online and paper at the same time. It is a lot of fun to be able to play decks made with cards in this cube online. I have already tried three preparation decks with AVR cards and cards from recent sets.

I plan to build this cube deck by deck, instead of including a bunch of cards and hoping that they can all be used to make working, fun decks. Now, about the decks:

On the eve of Battle for Zendikar coming out I have two types of decks: mostly Avacyn Restored only decks, and casual decks from a bunch of left over card packs from the many Deckbuilder Toolkits I have opened during the last few years. The AVR decks are easier to build because those cards were designed for a specific Limited experience, and the "Toolkit" decks are a little harder to build because they can a little off with their intended strategy.

Here is a deck mostly with Avacyn Restored cards to get things started (White/Blue Humans).

I have abandoned the idea of using the complete AVR for a cube for now.

Here is a link to the deck I will actually use for this cube.
Posted by Rubiera