On with the quest of finding deck building jewels. 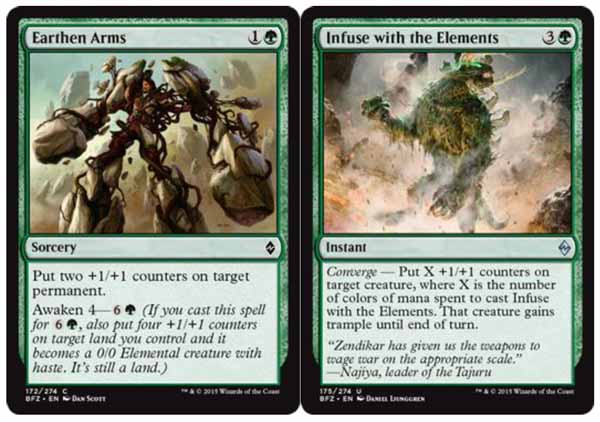 Earthen Arms: Limited battle trick.
Infuse with the Elements: you need a four color deck to maximize this card. Maybe a four color manabase can work in Standard. 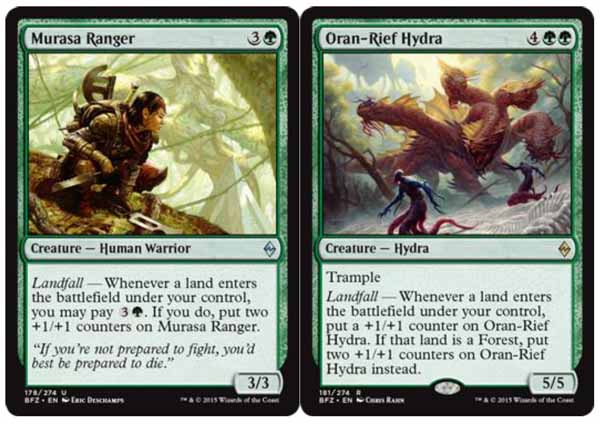 Murasa Ranger: its a late entry creature at 4, and it requires 4 more to trigger the landfall bonus. That's a lot of mana for two +1/+1 counters. Yes, it happens every time a land enters... and that can add up.
Oran-Rief Hydra: it enters late game, and that means there is a limit to how many times Landfall will trigger. Landfall seems to work really well early game or late late game. In the latter case it is possible that your opponent will not be able to remove this Hydra, and in that case, you have yourself a game-ending beater. This trick can work in Limited and Standard only, where the number of threats can be limited a lot. 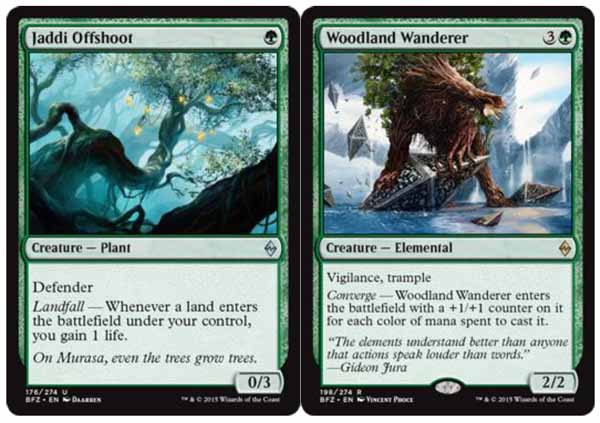 Jaddi Offshoot: this life gain trigger should help a mega lifelink deck that I think will be possible in this Standard.
Woodland Wanderer: I am so not digging Converge. OK, so you went all out and built a four-color deck, and you have all of your four colors. Now you cast this thing as a 6/6 for 4... I guess that will work. If you have done all that in Standard, OK, that's good. But in Modern, if you build a four color deck you want Cryptic Command instead of this. Converge reminds me of the Maze's End deck from Dragon's Maze. It is cool in Standard, I guess. 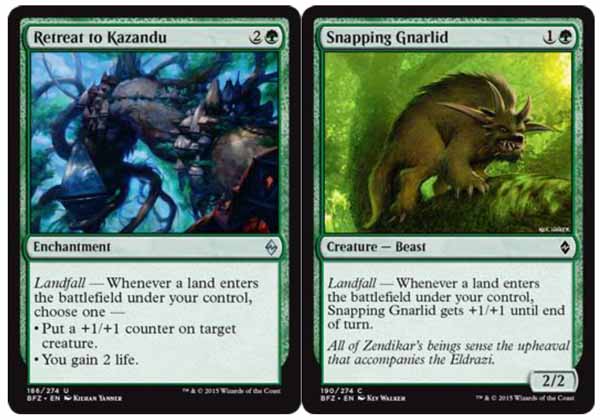 Retreat to Kazandu: this is a great retreat, up there with the black one. A 3 drop in green can enter turn 2 in Modern. In a Standard without one drop mana dorks, it can enter turn 3.
Snapping Gnarlid: it enters at about the same time 2 damage removal does. It seems fragile and a late pick in Limited. 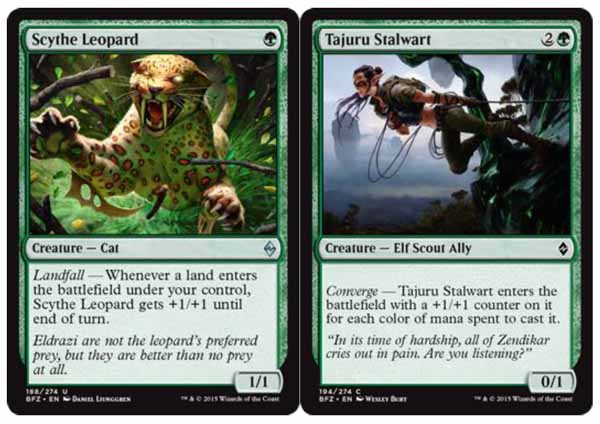 Scythe Leopard: OK, now we are talking. A Landfall trigger on a one drop is more like it. A solid pick in Limited, and a must have in many Standard decks.
Tajuru Stalwart: back to my manabase dependence issue. If it is not good in Limited, can it be good in Standard? I am missing something with the current Standard manabase. 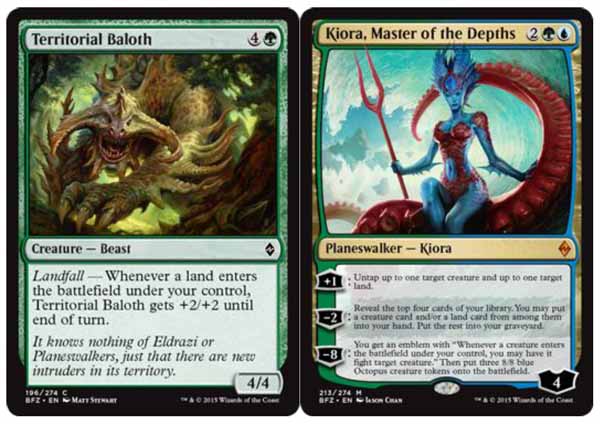 Territorial Baloth: late pick in Limited.
Kiora, Master of the Depths: It can enter at 5 loyalty and that is good because, unlike the Theros block Kiora, it cannot defend itself.
(+1 Untap up to one target creature and up to one target land.): Can open up two mana is the creature is a mana dork.
(-2: Reveal the top four cards of your library. You may put a creature card and/or a land card from among them into your hand. Put the rest into your graveyard.): Nice effect, especially to trigger Landfall every turn after casting Kiora.
(-8: You get an emblem with "Whenever a creature enters the battlefield under your control, you may have it fight target creature." Then put three 8/8 blue Octopus creature tokens onto the battlefield under your control.) I like the ultimate for the Theros block Kiora better. In this case, you get the tokens once. 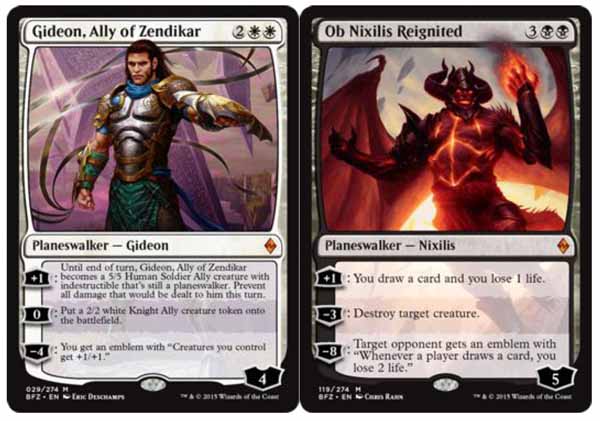 Gideon, Ally of Zendikar: Starts at 5 and can protect himself by becoming an indestructicle creature.
(+1 Loyalty: Until end of turn, Gideon, Ally of Zendikar becomes a 5/5 Human Soldier Ally creature with indestructible that's still a planeswalker. Prevent all damage that would be dealt to him this turn.): Like I just wrote.
(+0 Loyalty: Put a 2/2 white Knight Ally creature token onto the battlefield.): only one token. I guess that's OK.
(-4 Loyalty: You get an emblem with "Creatures you control get +1/+1."): An anthem that cannot be removed is nice, but this ultimate is a little underwhelming. All your opponent needs to have is a lot of creature removal.
Ob Nixilis Reignited: Comes in at 6 Loyalty with the +1 ability and that's great.
(+1 Loyalty: You draw a card and you lose 1 life.): I like this one the best.
(-3 Loyalty: Destroy target creature.): great in a creature-heavy Standard, useless against several decks in the older formats.
(-8 Loyalty: Target opponent gets an emblem with "Whenever a player draws a card, you lose 2 life."): Not ultimate enough, but it is a solid emblem that can win the game, only it needs help. Good ultimates don't need any help.

Link to Part 17
Posted by Rubiera