In with the new all the way for these. 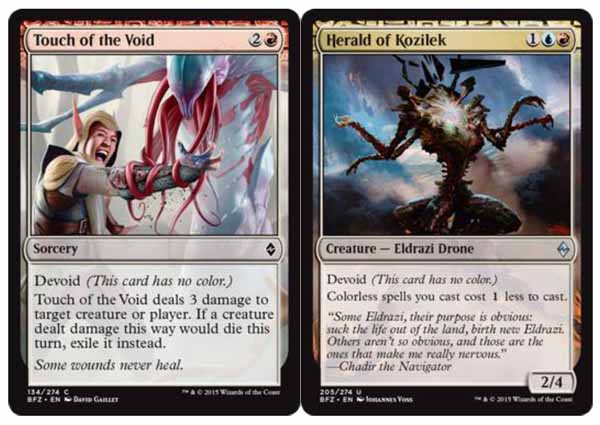 Touch of the Void: removal is this set is plain awful. This card should have been named something like Battlecruiser Bolt. Herald of Kozilek: IMHO the best card of the set, and an uncommon at that. As soon as I saw it I went and completed my playset of Phantasmal Image. I want to have this effect 8 times in a deck just to see what happens. Maybe once in my life I can cast a 10 drop eldrazi for 2. 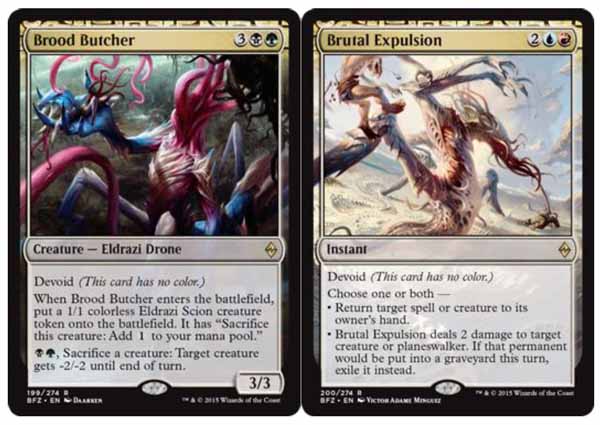 Brood Butcher: reads like an uncommon. I have no idea why anyone thought this card should be a rare. Its a five drop, which means that it will see Standard play and that's it. It only nets you one token, and the sacrifice gain is only -2/-2. Moving on... Brutal Expulsion: good effects, not sure if rare worthy, but you can use both and that is good, also its an instant. The first effect can be had at common for one blue mana. If it was blue/red at 2 mana I would have said something like 'nice, definitely a rare.' Begs a comparison with the commands in Dragons of Tarkir. Yet another example of tame removal in this set, I guess to balance Limited. 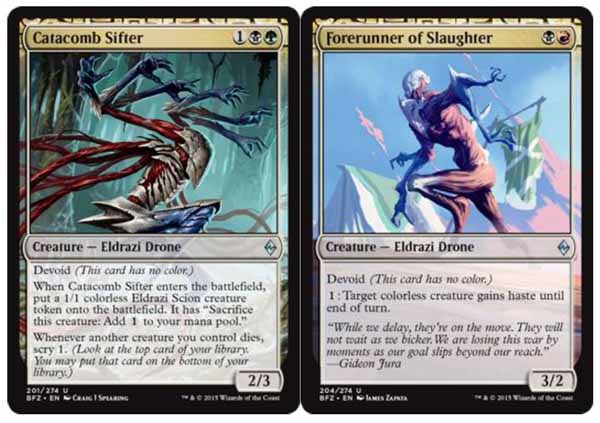 Catacomb Sifter: great card, it goes everywhere-in my AVR cube for the ETB effect, in Limited and in Constructed for all formats just to use Scry 1 every time I sac a critter. I just realized that if I sac multiple times I Scry 1 each time... umm, I am thinking about this. Forerunner of Slaughter: another great card. Very aggressively costed. Awesome in all formats. I want to drop a Wurmcoil Engine with haste with this thing. 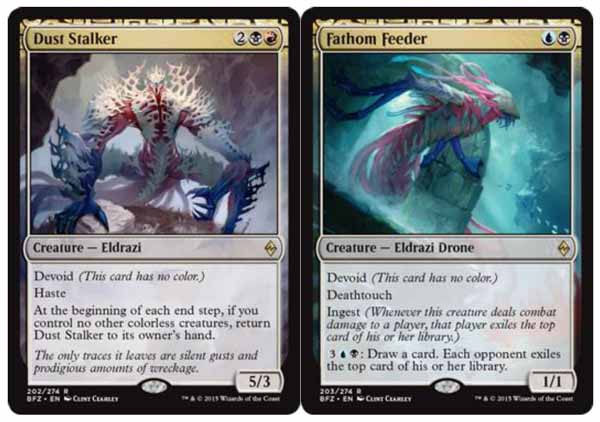 Dust Stalker: similar to Archwing Dragon in Avacyn Restored. Just keep those colorless creatures coming and that adverse effect will not trigger. Of course, if you have something else that says "whenever a creature enters the battlefield, you get to do this good thing" then by all means don't drop any more colorless creatures and trigger the effect. It could go well as a finisher in a Dash deck. Fathom Feeder: very good card IMHO. It is aggressively costed, and with deathtouch often your opponent will not block it and you get to Ingest. Its a 5 mana effect, which reads Standard-only but it does say "Draw a card," and that is always, always a very good thing in Magic to have on a card. 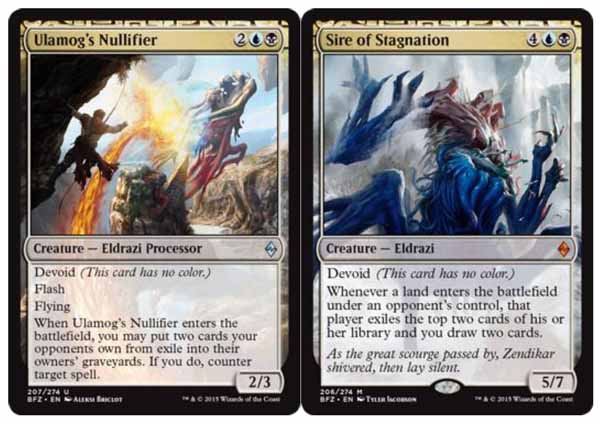 Ulamog's Nullifier: another awesome uncommon. What is it with this set? the uncommons read like rares, and the rares read like good commons. It has Flash, which is really good. You can use it to counter a spell for 4 by using two cards in your opponent's exile pile. It is a little costly, but you get to "counter target spell," and that is an unconditional counter. Definitely good in Standard, want to try elsewhere. Sire of Stagnation: very good in Standard and an outright bomb in Limited. You will either stop your opponent from casting lands or draw two cards every time they do so. That is definitely a Mythic effect. This is to me the best Mythic of all of the Eldrazi. And the icing on the cake is that every time your opponent plays a land you get two more cards in their exile pile for your effects. Oh.... and it is not Legendary. I call it a money card. Hope I am wrong, because then I can afford it.

Link to Part 10
Posted by Rubiera