Unlike Origins, this set has an incomplete cycle of two-color uncommon creatures. It is missing a White/Blue one. There are odd additions that I am sure are there to balance an archetype, or throw in goodies for EDH. 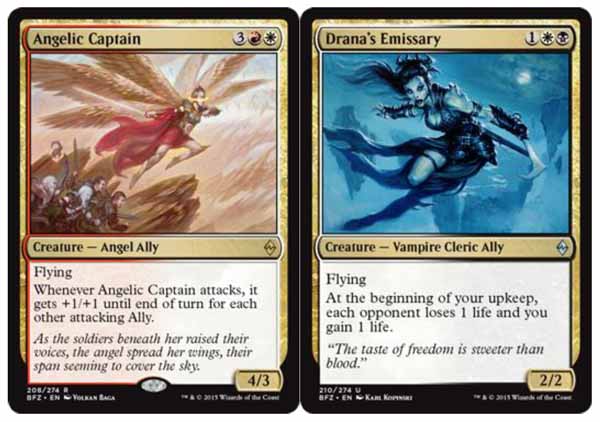 Angelic Captain: a solid rare... I was waiting to see more of these in this set. "each other" means this thing gets buffed big time if you have a bunch of attacking Allies, and White has most of them, and Red has a solid selection. I think this could be a money rare for this set.
Drana's Emissary: should be good in Limited. Just 3 turns of this creature on the board will place you 6 life apart from your opponent. It has Flying too. 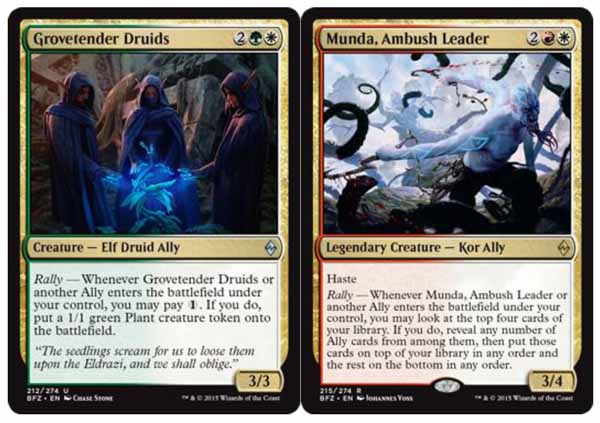 Grovetender Druids: OK, you only get one token for each Ally you cast. That is a good effect, but not a really good effect. Still, if this thing lives for three turns and you cast three Allies, that's three 1/1 tokens.
Munda, Ambush Leader: EDH White/Red Ally deck? Scry 4 that forces you to dig for Allies is really good. Another solid rare, finally! 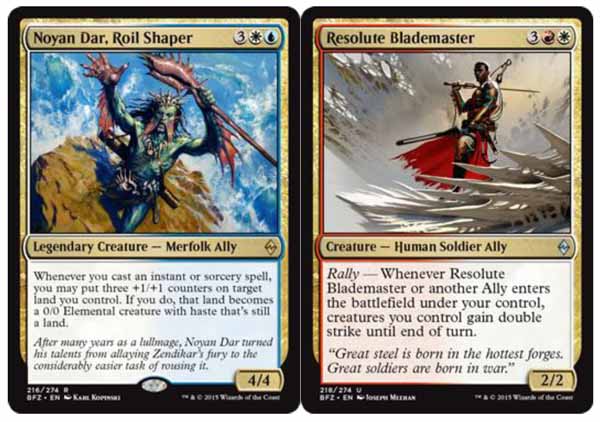 Noyan Dar, Roil Shaper: Solid Awaken enabler. Maybe there will be more blue Allies in the next set. As of this set, though, you are mostly riding on your white Allies to build with this card. I can see that working: mostly white creatures and mostly blue non-creatures will get you there.
Resolute Blademaster: solid Limited card. I wonder how many white and red Allies come out of six packs in a sealed event. In Standard it could be good too, although it is a 5 drop. 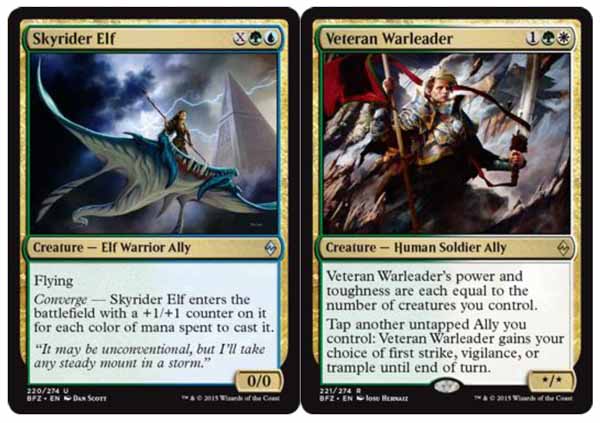 Skyrider Elf: waiting for more multicolored support in the next set? The X makes it very nimble. You can cast it as a 2/2 early in the game, or a 5/5 late in the game. 4 and 5 color decks in Limited are very difficult to pull off except, say, in Dragon's Maze Limited. It should be a solid Standard card with more Converge support that should come with the next set.
Veteran Warleader: now, here is a really good rare. Its the Voice of Resurgence token in creature form This card would have made a great substitute for Emmara Tandris in Dragon's Maze. The "tap another Ally" bit is really good. An over-the-top rare IMHO. 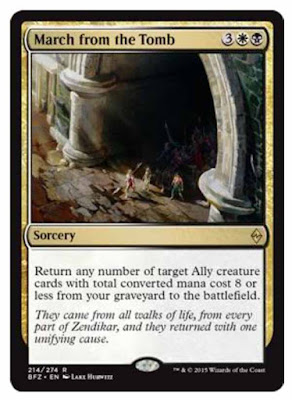 March from the Tomb: a very good sorcery in battlecruiser Magic in Limited and in Standard. Its a great card to recover from a board wipe. I like it a lot. 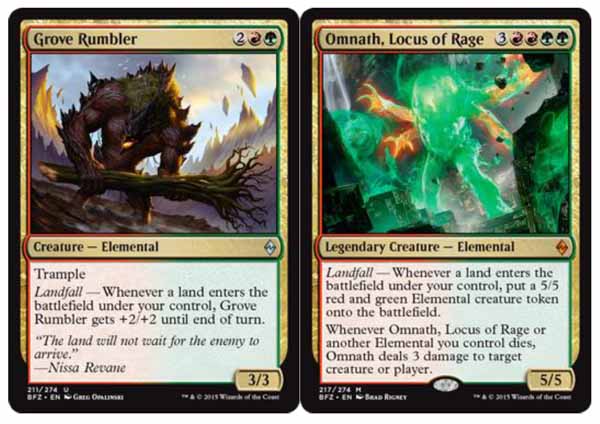 Grove Rumbler: a 5/5 for 4 is relatively easy to pull off many turns with a mana-rich deck. I would even try it in Modern even if it "dies to Lightning Bolt" (which is true for Dark Confidant, you know?). Omnath, Locus of Rage: more like Omnath, Locus of EDH. This card reminds me of Ruric Thar, the Unbowed from Dragon's Maze. 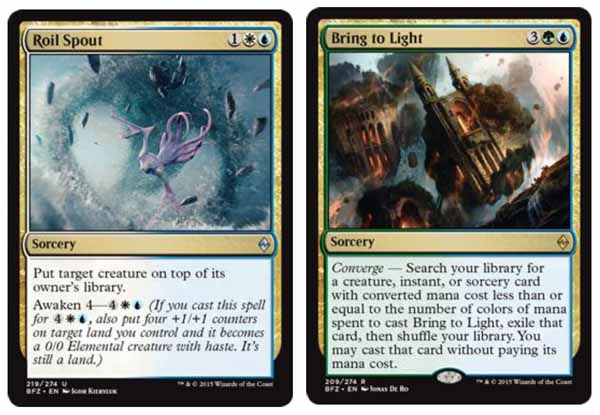 Roil Spout: another great uncommon. Early game you get disruption for 3, late game, you get that and a 4/4 creature land. Bring to Light: would read a lot better in an environment with better multicolored support, maybe next set. Right now, you will have to jump through many color hoops to tutor a card with converted mana cost of 4.

Link to Part 14
Posted by Rubiera